Huawei’s Ken Hu called for support from other companies and industries as he drew striking comparisons between the U.S.-led trade ban and the Cold War.

Speaking at the Potsdam Conference on National Cybersecurity in Germany, Hu, who serves as the Chinese company’s deputy chair, said its blacklisting “set a dangerous precedent,” one that disrupts the global supply chain and fair competition.

“This could happen to any other industry and company in the future if we don’t jointly confront these issues,” he said. “We need an integrated global ecosystem which can help us to promote faster technological innovation and stronger economic growth.” 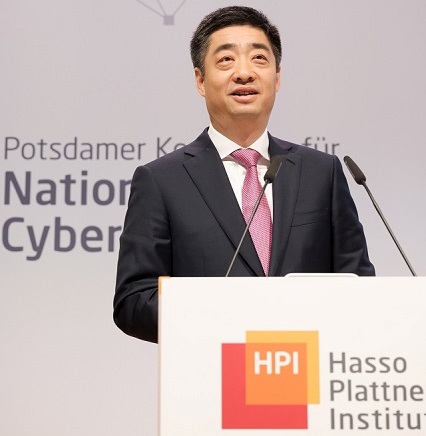 His talk follows a turbulent week for the technology titan. Last Thursday, the U.S. added Huawei to a trade blacklist as part of a growing effort to “secure the information and communications technology and services supply chain,” as President Trump’s Executive Order noted at the time. While this has led to a number of chip companies — in the U.S. and further afield — ceasing trade with Huawei, it also means that Google will no longer be able to offer Huawei its own Android services. With Huawei gaining ground on Samsung, the world’s biggest smartphone maker by shipments, the U.S. trade ban will hamper Huawei’s consumer businesses growth.

Huawei this week launched its first smartphones since the trade ban came into effect, and while these devices won’t immediately be affected, concerns about the company’s future ability to offer Android updates could impact sales.

“In Europe, approximately three-quarters of smartphone users rely on an Android-based phone,” Hu said. “Huawei accounts for roughly for 20% of this market. Such reckless decisions can cause a great deal of harm to consumers and businesses in Europe.”

Other companies — particularly Chinese smartphone makers — will be watching Huawei’s situation apprehensively. Its predicament demonstrates not only the power the U.S. wields over the global tech supply chain but also Google’s stranglehold on the Android ecosystem. This is what Hu is leveraging in his appeal for support — the trade ban could spur other technology companies to unite and reconsider their relationship with Android.

Elsewhere, Hu drew parallels between the company’s trade woes and the Berlin Wall, which once ran near Potsdam.

Tips for Keeping Your Crew Comfortable During an Outdoor Trade Show

How to Know If Someone Has Blocked You on WhatsApp (2019)