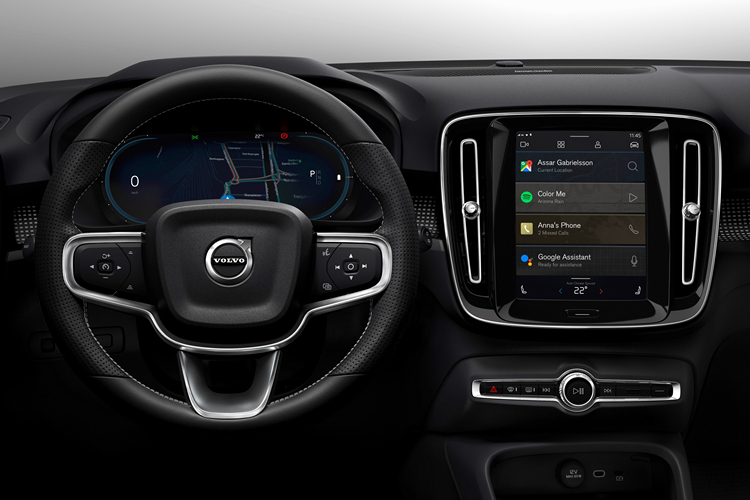 Volvo is all set to launch its first EV, an all-electric variant of the brand’s own XC40 SUV. To make the electric vehicle even more appealing, the automaker has teamed up with software giant Google to equip an infotainment system based on Android.

What this means for the end-users is that you don’t need an Android smartphone with this vehicle. The car has built-in Google Assistant, Google Maps, and even Play Store for downloading compatible apps.

Having Google Assistant accessible anytime will be helpful to make voice commands for controlling the temperature, choosing the destination, playing music, and so on. This will effectively reduce smartphone distracted drivers.

Also, this Volvo EV will be receiving over-the-air updates for providing performance improvements and introducing new features eventually. This is not a surprise since major electric car makers like Tesla roll out frequent firmware updates for improving the user experience.

“We are finally giving you the same experience in your car that you’re used to on your phone, but adapted for safe interaction while driving. And by introducing over-the-air updates for everything from maintenance to completely new features, the car can stay as fresh as your other digital products, always with the latest and greatest features.”, said Henrik Green, Chief Technology Officer at Volvo Cars in a press release.

In case you’re a person who’s in the Apple ecosystem wondering and feeling left out, don’t worry. The infotainment system will indeed support Apple’s CarPlay as well.

We’ll get to know more about the electric car once it launches on October 16. Until then, stay tuned for more updates and let us know your thoughts on automakers adopting technologies from major tech companies in the comments below.

From The New York Times to a comic on sex, illustrator Kati Szilágyi discusses her recent work

Back to Basics – SEO vs PPC, What’s Best for a New Business?