Creating a Pencil Effect in SVG

Dragons Abound produces maps in SVG, which is a vector graphics format.  Vector graphics have a lot of features (such as lossless zoom) that are nice for maps.  And vector graphics are good for producing crisp, well-defined lines like an ink stroke:

On the other hand, vector graphics are not very good at producing textures with a lot of non-repeating fine detail.  In vector graphics, each drawn element is represented with a description of its size, shape, location, color and so on.  To represent a lot of fine, non-repeating detail, you need to describe lots and lots of elements.  Something like this pencil stroke 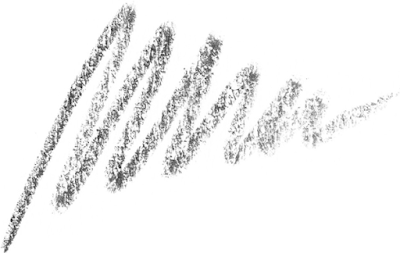 would require many tens of thousands of different elements.  Basically each little blob of gray in that image would be separately defined.  Other things, like blurred images, are even more problematic.

This is a pretty big limitation on vector graphics, so SVG has added some workarounds to let you reproduce some of these texture effects more efficiently.  I’m going to explore using some of those SVG features to create something like a pencil line.  Of course, there are many other more sophisticated approaches to replicating pencil strokes.  Academic papers have been written on the subject.  But I’m hoping to create a fairly simple filter that has an acceptable result.

As always, my preference would be to borrow or build on a filter that someone more talented than myself has already created, but in this case I find that there’s a surprising paucity of vector pencil filters to use for inspiration.  (Cue ominous foreshadowing music: There may be a reason for this.)  So I’m pretty much on my own.

I’ve posted previously about Dragons Abound‘s capabilities to create “hand-drawn” lines.  This was concerned primarily with avoiding mathematically straight lines and instead creating lines with subtle variations that look more like they were drawn by a human hand.  You can see some of this in the mountain illustration above.  This works fairly well to create an ink illustration style, but it doesn’t work very well to create a pencil line, because it lacks the pencil texture.

If you look at some pencil strokes, like the example above, or these:

you’ll see a number of features that distinguish pencil strokes from ink lines (or computer-drawn lines).  Most importantly, they have a texture caused by the way a pencil interacts with paper.  Paper has a grain and the pencil tends to deposit graphite onto the high parts of the grain and leave the lower parts white.  Rough-grained paper results in more obvious texture; something like illustration board is so fine-grained that it imparts almost no texture.  Second, the edges of pencil lines are somewhat indistinct.  Again, this is largely caused by the irregularities in the paper and in the pencil point itself, which result in varying amounts of graphite being deposited along the edge of the line.

(Of course, there are other effects as well.  Pencil builds up on itself and so can appear darker where strokes cross.  Strokes themselves vary in pressure and this can change the darkness of a stroke along its length.  But for the purposes of this posting, I’m going to be focused primarily on trying to recreate the revealed paper texture.)

To get started, I will set up some plain gray lines: 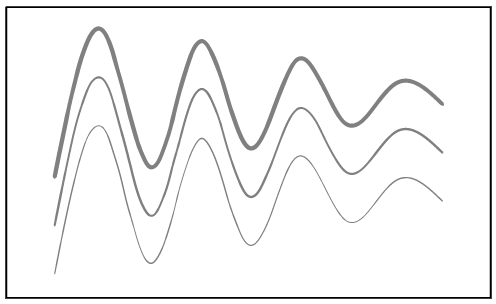 Here I’ve “hand-drawn” lines that are 4, 2 and 1 pixel wide.  Unfortunately, SVG effects tend to look different when applied to different width lines, so I want to compare the effect on different sizes.
The primary capability SVG offers for adding texture effects is called filters.  Filters are applied after a vector object is drawn, and they change the way the object is presented — like looking at the object through a filter, hence the name.  Typical filters can do things like change the color of the object, add noise to the object, etc.  Filters are a fairly complicated topic with a complex syntax, so I won’t be offering a full tutorial here on how to use them, but I’ll try to give enough detail to make it clear what I’ve done, and at the bottom of this posting I’ll provide a link to a Codepen with the filter so you can play around with it yourself.

To begin, I’ll try to change the edges of the lines so that they are not smooth but have irregular edges similar to paper grain.  I’ll do this by moving the pixels in the line around.  The filter element that does this is called “feDisplacementMap” and it moves each pixel around based upon the values in a different image.  Since we want each pixel to move around in a random but coherent way, we want to feed noise into feDisplacementMap to control the movement.  Fortunately, SVG provides another filter element call “feTurbulence” that is specifically for producing noise.  So we can combine those two filters to roughen up the edges of the lines. 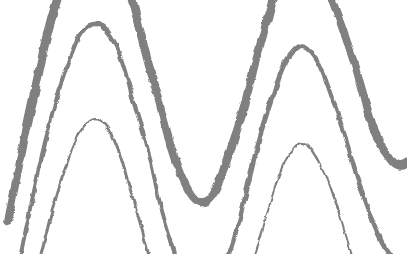 The amount and roughness of the line can be controlled with parameters to the displacement map and the noise generation.  Unfortunately, the displacement is in absolute units, rather than relative to the line size.  Here I’ve tweaked these to find something that looks reasonable for all the line widths, but you can see a problem when I increase the scale of displacement: 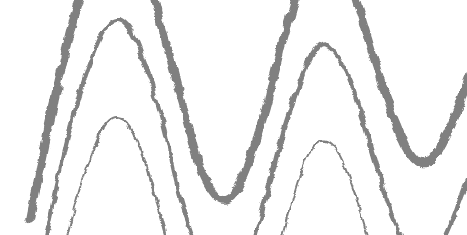 Now the displacement is big enough to start moving the entire line around, rather than just tweaking the edges.  This effect is magnified on thinner lines.  In this example, the 4 pixel line still looks mostly like the edge is rough, while the two pixel line has had obvious distortions added to it.  So I have to pick a value that doesn’t create distortion in the thinner lines.

When I zoom out to regular magnification, this is what the effect looks like (after some tweaking to improve the effect): 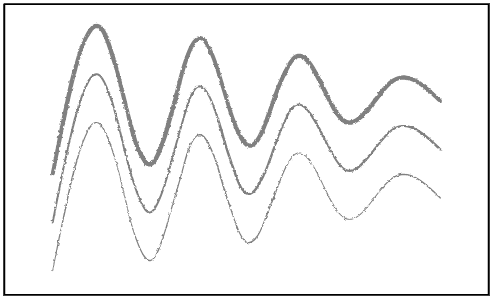 At this scale, a lot of the rough edges become spots and speckles.  It’s not an entirely unpleasing effect and is somewhat reminiscent of a pencil line.  (However, in general SVG filters seem to have scaling problems — in many cases they look good when zoomed in but look like they’ve been put through a poor resizing algorithm when zoomed out.)

Here’s what this looks like used to draw mountains (pencil effect to the left): 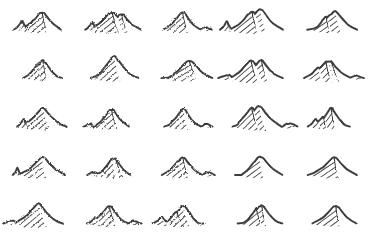 That’s not terrible, but it does have some sharp artifacts that look a little odd.  And when this is applied to thin lines close together, they end up overlapping and merging: 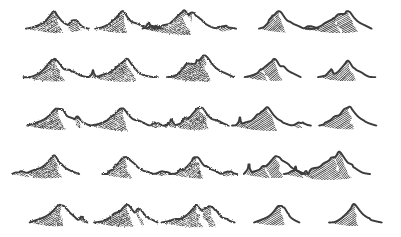 Again, this is not entirely terrible, and the shadows in the pencil mountains end up looking very much like they’d been shaded in with pencil, if that’s an effect you want.

This approach adds roughness to the outline of the pencil stroke, but it doesn’t change the uniform color of the stroke.  Real pencil strokes have texture inside the stroke as well, as the graphite colors some spots on the paper more than others.

To add texture inside the stroke, I will use an SVG filter that generates noise and then combines the noise with the stroke: 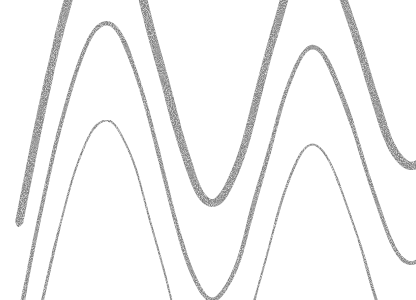 Here in close up you can see how the inside of each stroke is now filled with a pseudo-graphite texture.  Here’s what it looks like at normal scale: 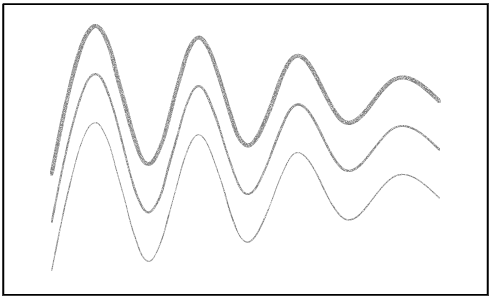 This doesn’t look too bad, particularly on the thicker lines.  Here’s what this looks like used on mountains: 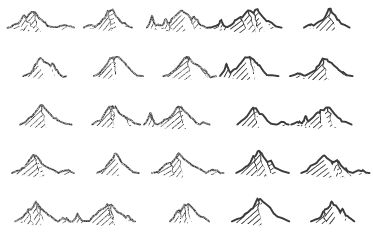 It is not as good at this scale.  Note that this filter also reduces the darkness of the lines; this is a natural result of adding white noise to the lines.  To some extent this can be mitigated by increasing the contrast of the noise, so that some parts of the line are made darker to compensate: 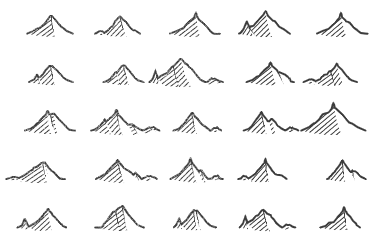 But since the line colors are already pretty dark to start with, this eliminates much of the “pencil” effect.  So if I use this, it will have to be tweaked to produce a pleasing balance.

Obviously, both of these can be combined.  This looks pretty good close up: 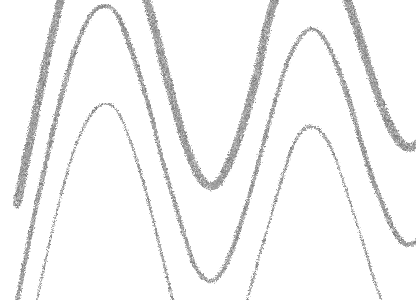 It has both the rough edge and the interior texture we expect in a pencil line.  At normal scale it is not quite so good: 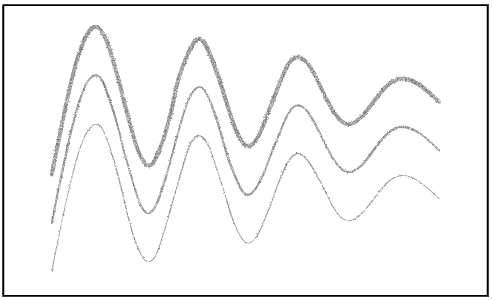 because of the sharp artifacts introduced at this scale.

A good trick to make this texture look better is to add a paper texture to the background: 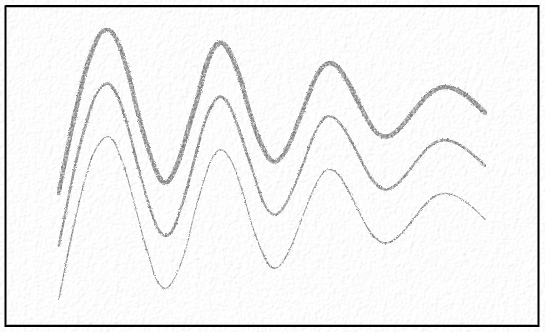 The eye now sees the texture consistently across the image.  Even at a pretty subtle level, this helps trick the eye into believe that the texture in the line comes from the paper.

Here’s an example of using this filter on a map (with a paper texture): 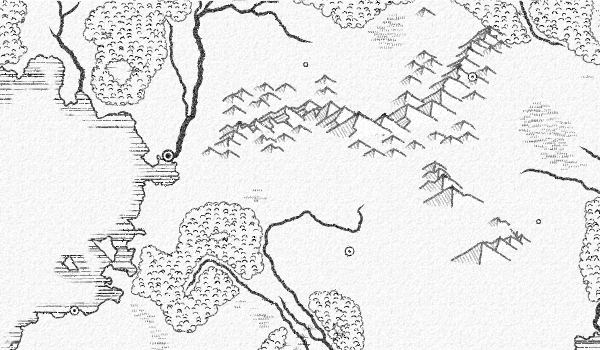 Overall this isn’t too bad, although on detailed inspection it looks as if there’s simply been noise added everywhere.  At 200% artifacts are more evident: 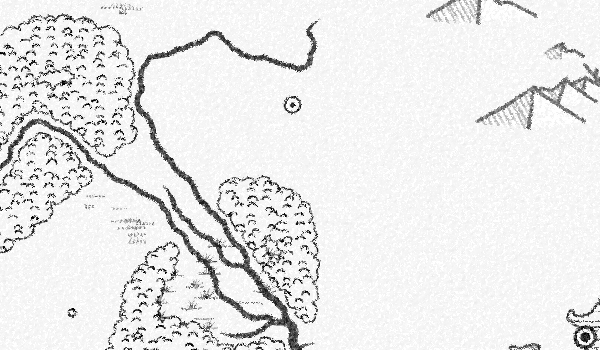 Another way I might create a rough edge for a pencil line is to draw the line multiple times with slightly different perturbations and a lowered opacity.  In the center of the line where the multiple versions overlap, the density will be something like the original line; at the outside edges where sometimes only some of the lines are showing there will be lower opacity and less distinct edges.

The general way to do this with SVG filters is to use feTurbulence and feDisplacementMap together to create a perturbed version of the line, but to do this multiple times and then combine them all at the end with a series of feBlend primitives.  If we blend (say) three copies, we have to also lower the opacity of the lines appropriately.  (I’m not entirely certain how to calculate the appropriate opacity, but I think it might be the cube root of the luminosity of the line.)

That produces an effect like this (with three lines, closeup): 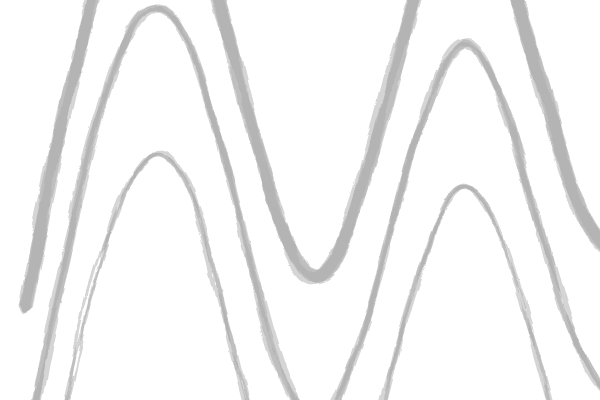 There are a couple of drawbacks with this approach.  The filter has a fixed perturbation, so it has more impact on narrower lines, and you can see that the 1 pixel line is completely separated at points.  Secondly, this is a fairly complex filter that creates three separate perturbations and merges them; this might be very slow on a big complex image like one of Dragons Abound‘s maps. 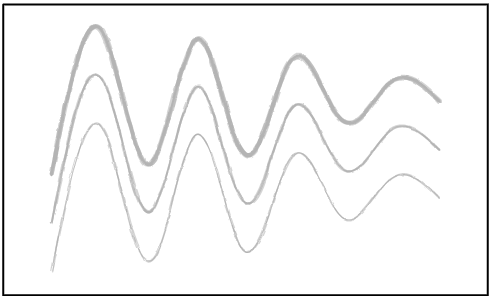 This doesn’t look exactly like a pencil outline to my eye, but it does do a better job of eliminating the sharp artifacts from the other approach.

This can be combined with the interior texture filter from above to add texture to the inside of the pencil lines, and the paper texture: 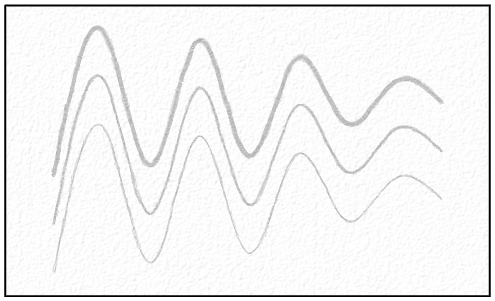 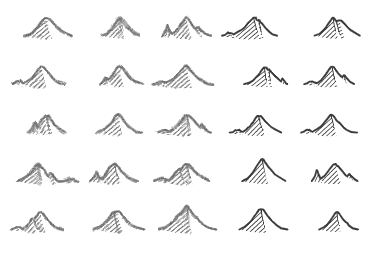 This filter tends to spread out the lines more than the other filter — effectively making them thicker.  Sometimes this generates a sketch-like effect with multiple lines that isn’t entirely displeasing.

Here’s an example of using this filter on a map: 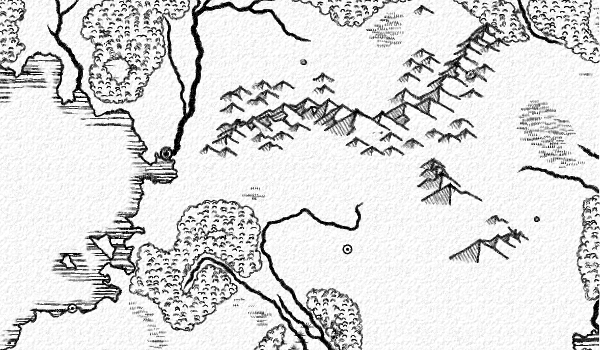 This maintains the original darkness better than the first filter, and while it doesn’t look exactly like pencil to my eye, it isn’t entirely unpleasing.  Zoomed in to 200%: 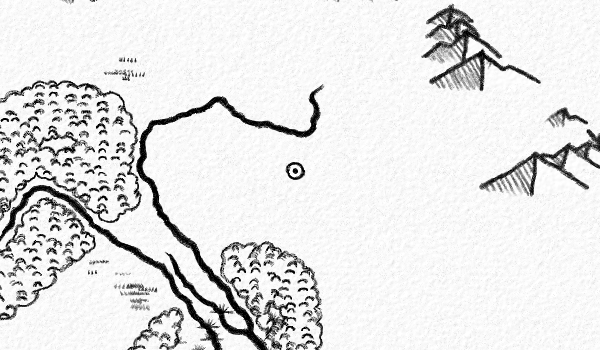 This filter largely avoids the sharp artifacts of the first filter when zoomed in.  The overlapping lines effect on narrower lines (such as the forest) starts to look pretty artificial, but broader lines like the mountain and rivers still look good.  However, the internal noise is almost entirely lost within black lines like the river.

I have put both of these filters up on Codepen so you can try them out yourself.  You can find the first filter here and the second filter here.  I encourage you to play around with them and try to improve them — and if you do come up with something better, please let me know!  I’d love to have a really good pencil filter!