With PUBG Mobile gone from the Indian market, players are now looking for similar battle royale games for their mobile devices. As a result, Call of Duty Mobile and Garena’s Free Fire, two PUBG Mobile-like games for mobile devices have seen a huge surge in downloads. While COD has remained more or less the same in terms of content, Garena has been working, specifically for the Indian market, to improve their game and add exciting new content. Now, the publishers have collaborated with the digital streaming giant, Netflix to bring Money Heist’s “Professor” and his crew to the game.

Garena, the Singapore-based publisher recently added a ton of new content to its mobile game, Free Fire with the introduction of the “Free Fire x Money Heist” event. This event has been live in the game from September 13 and will continue through September 22, with a massive in-game heist happening on “Peak Day”, i.e., September 20.

“Maxim was detained by the police during the heist, and is now counting on his partners to get him out.”, reads the official press release of the event. “Free Fire players all around the world have been tasked by The Professor to retrieve and secure Maxim, while retrieving the stolen money.”

On the “Peak Day” of the event, players will be able to log in to their account and instantly get a complimentary permanent “AN94 – Plan Bermuda gun skin”, along with special tokens which can be later encashed for “pet Panda and the Panda Heist skin”.

The developers will also add the long-awaited “Money Heist” game mode to the game under this event. This special crossover mode will bring 2 teams of 4 players each head-to-head to print a specific amount of cash in the stipulated time. They can print the money by securing money printers in the map. The mode will go live on “Peak Day”, that is, September 20, and will remain in the game until September 22.

Apart from the in-game content, the publishers also released two new short clips on YouTube – “Plan Bermuda is Underway” and “Plan Bermuda Chapter 2“, showing how the “Professor” from Money Heist recruited the Garena characters from the game for the biggest heist. These two videos are a part of a mini web series of which the third and the final episode released yesterday.

Apart from these fun events and items, the publisher also released a Hindi live-action comedy mini-movie on YouTube made specifically for India. The publishers also collaborated with local street artists from Brazil, Argentina, and Mexico to cover walls and buildings with “Free Fire x Money Heist”-themed artwork. Moreover, the publishers also flew a giant “PProfessorda” blimp across the sky of Mexico City. 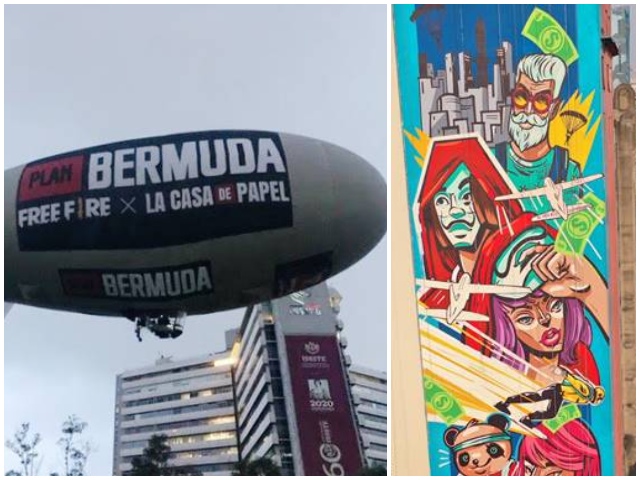 So, if you are a fan of the “Professor” and is looking for something new after PUBG’s goodbye, then you can surely start playing Garena’s “Free Fire” during this exclusive and special event. Who knows, maybe this will be your replacement for PUBG Mobile.