Despite the popularity of social media, for communication that actually matters, e-mail reigns supreme. Crucial to the smooth operation of businesses worldwide, it’s prized for its reliability. Google is one of the world’s largest e-mail providers, both with its consumer-targeted Gmail product as well as G Suite for business customers [Jeffrey Paul] is a user of the latter, and was surprised to find that URLs in incoming emails were being modified by the service when fetched via the Internet Message Access Protocol (IMAP) used by external email readers.

This change appears to make it impossible for IMAP users to see the original email without logging into the web interface, it breaks verification of the cryptographic signatures, and it came as a surprise.

For a subset of users, it appears Google is modifying URLs in the body of emails to instead go through their own link-checking and redirect service. This involves actually editing the body of the email before it reaches the user. This means that even those using external clients to fetch email over IMAP are affected, with no way to access the original raw email they were sent.

The security implications are serious enough that many doubted the initial story, suspecting that the editing was only happening within the Gmail app or through the web client. However, a source claiming to work for Google confirmed that the new feature is being rolled out to G Suite customers, and can be switched off if so desired. Reaching out to Google for comment, we were directed to their help page on the topic. 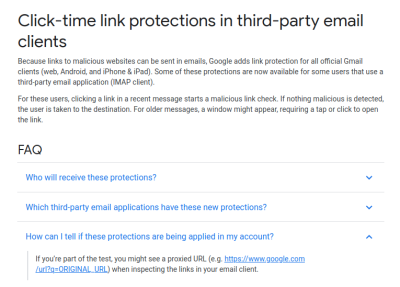 The stated aim is to prevent phishing, with Google’s redirect service including a link checker to warn users who are traveling to potentially dangerous sites. For many though, this explanation doesn’t pass muster. Forcing users to head to a Google server to view the original URL they were sent is to many an egregious breach of privacy, and a security concern to boot. It allows the search giant to further extend its tendrils of click tracking into even private email conversations. For some, the implications are worse. Cryptographically signed messages, such as those using PGP or GPG, are broken by the tool; as the content of the email body is modified in the process, the message no longer checks out with respect to the original signature. Of course, this is the value of signing your messages — it becomes much easier to detect such alterations between what was sent and what was received.

Understandably, many were up in arms that the company would implement such a measure with no consultation or warning ahead of time. The content of an email is sacrosanct, in many respects, and tampering with it in any form will always be condemned by the security conscious. If the feature is a choice for the user, and can be turned off at will, then it’s a useful tool for those that want it. But this discovery was a surprise to many, making it hard to believe it was adequately disclosed before roll-out. The question unfolded in the FAQ screenshot above hints at this being part of Google’s A/B test and not applied to all accounts. Features being tested on your email account should be disclosed yet they are not.

Protecting innocent users against phishing attacks is a laudable aim,  and we can imagine many business owners enabling such a feature to avoid phishing attacks. It’s another case where privacy is willingly traded for the idea of security. While the uproar is limited due to the specific nature of the implementation thus far, we would expect further desertion of Google’s email services by the tech savvy if such practices were to spread to the mainstream Gmail product. Regardless of what happens next, it’s important to remember that the email you read may not be the one you were sent, and act accordingly.