This YouTuber Modified an iPod Classic to Stream Spotify

When his mother-in-law gifted a 4th-gen iPod Classic to YouTuber Guy Dupont, he was hit by a great force of nostalgia and an idea to give the iPod some new capabilities. So, being a “creative technologist”, Dupont gave the retro Apple device the ability to stream music directly from Spotify and even update playlists by accessing the music streaming service’s online server.

Now, the project was not as simple as sideloading the Spotify app on the iPod Classic. If you remember one of these from back in the days, you would know that the 4th-gen iPod Classic did not have any wireless connectivity such as Wi-Fi to access the internet. So, streaming music via Spotify on a device like this is technically impossible.

However, that did not stop the YouTuber to turn his project into reality and for that, he had to completely rebuild the iPod from the ground up. Dupont calls the new device “sPot”.

Now, do keep in mind that this is not an easy task and Dupont replaced almost every hardware component of the iPod Classic to turn it into a Spotify streaming device. He also wrote a custom program for the device to make it stream music on the said music streaming platform.

For starters, Dupont took the iPod apart and replaced its motherboard with a $10 Raspberry Pi Zero W to give the device wireless connectivity. This way the device could access online material and also connect to wireless headphones or speakers. Although the 3.5mm headphone jack is still there on the device, it is essentially dysfunctional. 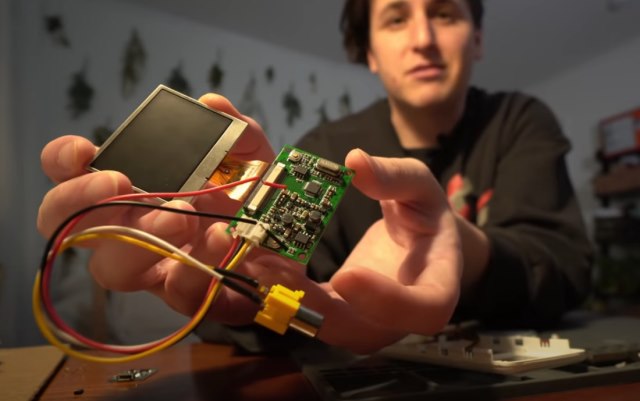 All the components in the device cost Dupont a generous $100 with the most expensive one being the color display panel. This was mainly because there aren’t a lot of display panels available in the market that fit the tiny screen cut-out on the iPod Classic.

Moreover, Dupont also wanted to keep the iconic click wheel of the iPod (remember those?) working. For this, he took help from a Hackaday article from 2010 which details all about the iPod’s click wheel and its connectors. Then he attached a haptic motor to the device and connected the click wheel to the Raspberry Pi motherboard to make it work just like how it was on the original one. And lastly, he connected a 1,000mAh battery to power the motherboard and the display.

Coming to the software front, the creative technologist wrote various programming for the device to run Spotify. He also created a custom app called Raspotify that enables the Raspberry Pi system to access Spotify’s online servers via the Spotify Connect API. He also gave the app the ability to search for songs on the platform. However, with the lack of a touch display and a physical keyboard, typing, even a few letters, on the device takes some time.

The YouTuber made a detailed video about the “sPot” project on his YouTube channel and also submitted an overview to Hackaday. Moreover, he is also in the process of uploading all the code for his programming and Raspotify app on Github.

You can check out Dupont’s YouTube video on “sPot” right below.